Today marks the 71st anniversary of the Proclamation of Independence of the Republic of Indonesia. On the morning of 17 August 1945, the Indonesian nationalist leader Sukarno read out before a small audience gathered outside his own house at Jalan Pegangsaan Timur 56 in Jakarta a simple statement which was broadcast throughout the country:
Proclamation: We the people of Indonesia hereby declare the independence of Indonesia. Matters concerning the transfer of power, etc., will be carried out in a conscientious manner and as speedily as possible.  Djakarta, 17 August 1945. In the name of the people of Indonesia, Soekarno – Hatta

The red-and-white flag, ‘Sang Merah Putih’, was raised and the song ‘Indonesia Raya’ – now the national anthem – was sung. 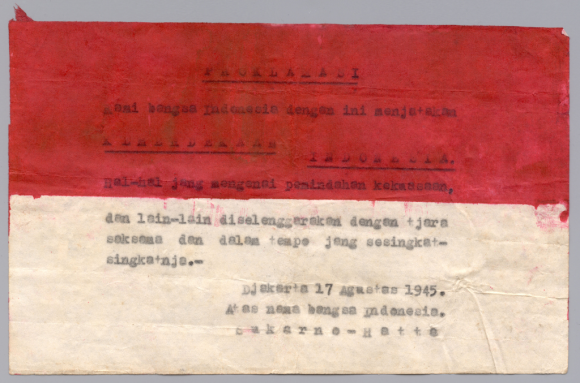 Typewritten handbill with the text of the Proclamation of Independence of Indonesia. British Library, RF.2005.a.465

Just two days earlier, on 15 August 1945, the Japanese occupying forces in Java had surrendered unconditionally to the Netherlands East Indies.  Since no Allied forces had yet landed to reconquer Indonesia, the country was in a state of political turmoil, and the opportunity to proclaim independence was seized. But the armed struggle was only just beginning, and for the next four years Indonesian nationalists were forced to wage a revolution against returning Dutch forces attempting to reimpose colonial rule, and it was only in 1949 that the Dutch finally acknowledged the independence of Indonesia.

It is hardly surprising that the British Library has few publications or papers deriving from the chaotic earliest days of the new republic. But thanks to the personal interest of a former curator of Dutch collections in the British Library, Dr Jaap Harskamp, in the late 1980s and 1990s the British Library slowly began to build up an important collection of papers, documents, books, pamphlets and posters relating to the Indonesian struggle for independence, many deriving from the heirs of Dutch soldiers and officials fighting against the Indonesian forces.  The Indonesia Merdeka Collection, which now numbers around 1,500 titles, is in size and scope second only to the holdings of the KITLV in Leiden.  The collection has been fully catalogued in a published volume (Harskamp 2001), with all the individual items also accessible through the Library’s online catalogue Explore.  The rare copy of the proclamation shown here is one of the highlights of the collection. 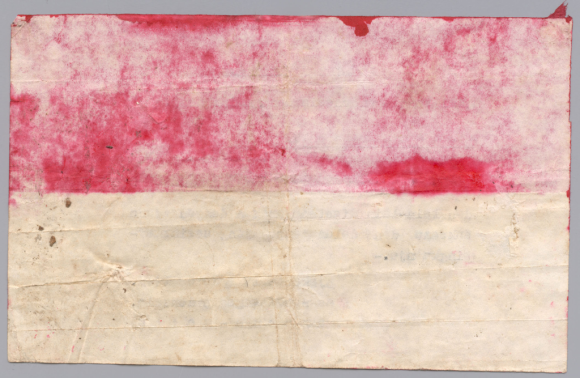 Reverse of the handbill containing the text of the Indonesian Proclamation of Independence. British Library, RF.2005.a.465